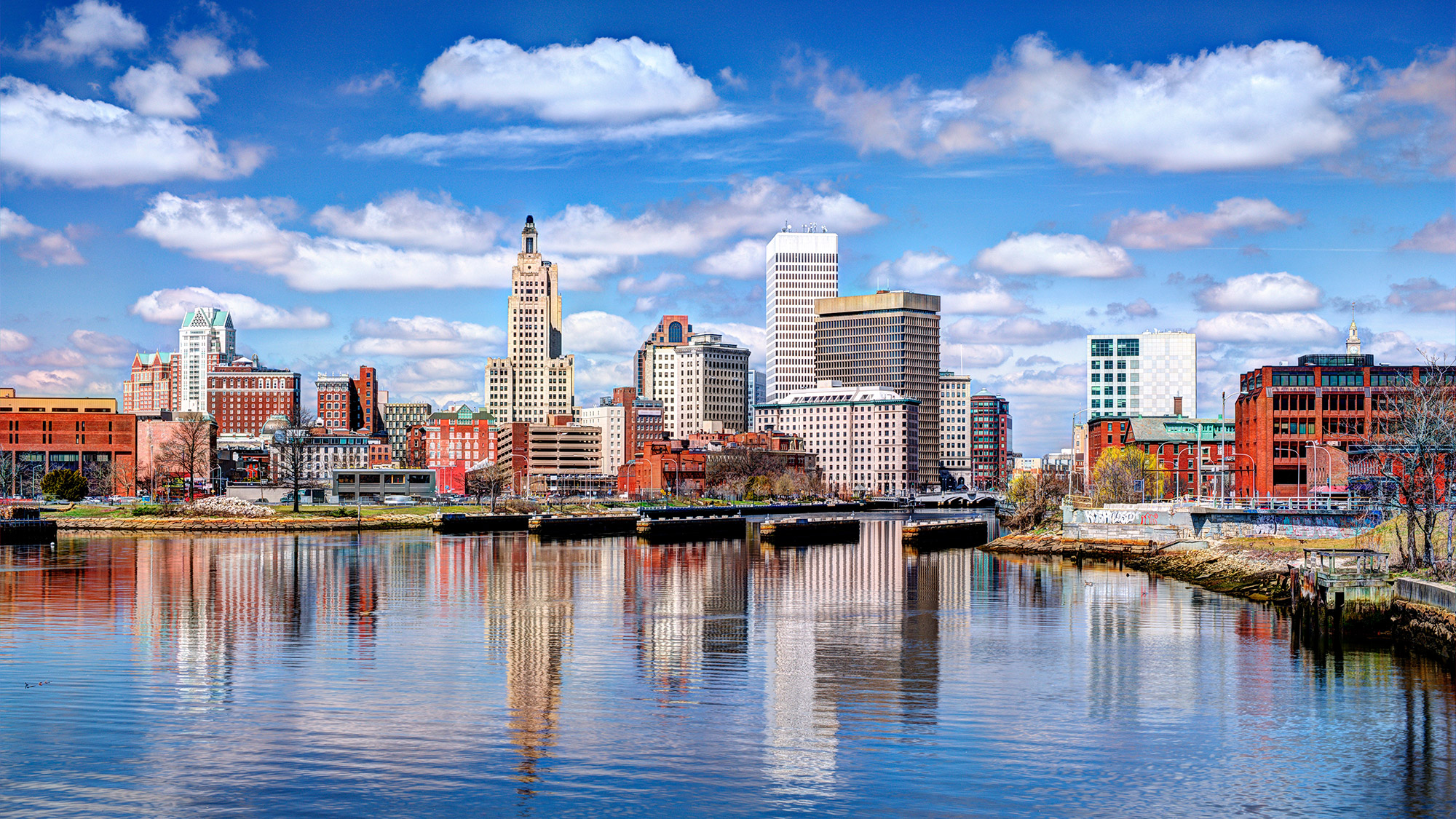 Rhode Island is like one of those tiny hors d’oeuvres at a nice restaurant; it barely takes up a 10th of that pristine, white plate, and yet, when you bite into it, it’s filled with rich flavors, each one with its own unique zing. You can’t exactly bite into Rhode Island, but this little state is packed with a rich culture, a fascinating history, academia, affluence, and, of course, some really great seafood restaurants. Each city, town, and place within its borders brings a different flavor—some undoubtedly better than others. The Movoto Real Estate Blog is on an ongoing quest to bring you the best “flavors” in the country; the most exceptional places in each state. Which was the best in Little Rhody? That honor goes to Westerly. Of course, there are plenty of other ingredients to making this state great, and here are the 10 best:

We started off the post with a food metaphor, comparing Rhode Island to a tiny but titillating appetizer, each of its places adding a certain flavor. Well, with Westerly, this comparison may just be a bit more literal, with all of the delicious restaurants it has to offer. Places like Cooked Goose, Oak St. B&B, and Ella’s Fine Food and Drink are just some of the many businesses that make up Westerly’s large number of amenities—which is a main reason it ranked so well in our list. The other reasons this (literally) delicious town made it to the top were its high overall quality of life score and an unemployment rate of just 8.7 percent, one of the best in the state. As far as quality of life goes, Westerly ranked well here, mostly due to its student-teacher ratio of just 14 to 1 (where the state average is 15 to), and for a median home price of $301,200, indicating the area’s strong desirability. The cherry on top? Westerly has a crime rate of just 1,907 crimes per 100,000 people, making it the seventh safest place on our list.

Located inside the town of Hopkinton, Ashaway is its own unique community—a close-knit place of just over 1,400 residents with charming businesses like Pelloni Farm, which adds a whole list of flavors to this village on its own. Delicious chocolate peanut butter cupcakes aside, Ashaway scored particularly well on our list for its overall quality of life. That included a low student-teacher ratio of just 14 to 1, a median household income of $72,024 (one of the highest in the state), and the second highest median rent price, of $1,591—a good indication of Ashaway’s desirability. Clearly there’s much here that’s desirable. Not only are the businesses charming and quaint, but, as you might expect from such a close-knit community, this village is safe, with a crime rate of just 892 crimes per 100,000 people. It also shares one of the lowest unemployment rates in the state, just 8.7 percent.

Another village within Hopkinton, Hope Valley has all of the charm and coziness of our No. 2 spot, only it is about eight times larger. Still, that leaves Hope Valley with a population of just 8,188, which boosted its number of amenities just enough to rank it 16th in that criterion. This wasn’t where Hope Valley tully excelled, however. The village came in as the very best on our top 10 in terms of overall quality of life, with the highest median household income on our list, $78,214, and one of the best student-teacher ratios, just 13 to 1. All of this, plus a crime rate of just 943 crimes per 100,000 people, and it’s clear where this valley got its name. Not to be outdone by its neighbor and No. 2 above, Hope Valley has its own charming little bakery: West’s Bakery. Pelloni Farms or West’s? We’ll leave it up to Hopkinton residents to decide; either way, you have some delicious options.

Located within the town of South Kingston, this village of just 5,405 residents may be best known as the home to the main campus of the University of Rhode Island. Aside from basically being run by students, Kingston is also one of the most historically rich places in the state, with a good number of its buildings listed as historical landmarks. Perhaps because the area is so centralized, Kingston had one of the lowest commute times on our list, an average of just 16 minutes. To put that into perspective, just take a look at Pascoag, where the average commute time was 31 minutes; nearly twice the time in Kingston. Plus, Kingston had some of the highest median home and rent prices in the state, which may not exactly sound like a perk for all of those students; but it is a good indication of the area’s desirability.

When you Google “Newport, Rhode Island” and the first thing that comes up is “Newport, Rhode Island mansions,” that seems pretty telling. Located on Aquidneck Island, this city of 26,486 is one of the more affluent on our list and the first of the larger places in our top 10. With a larger population, comes a larger amount amenity—in this case, so many that it earned the sixth highest spot in this criterion. Newport residents also made a higher than average income of $57,640, but where the quality of life score really got a boost was from the expensive median home and rent prices: $429,000 and $1,078, respectively. Add in some of the most scenic views of the Atlantic Ocean, some of the grandest homes ever built, luxurious sailboats, yachts, and everything in between—well, it’s no wonder real estate prices are so high. Who wouldn’t want to live here?

With over 80,000 residents, Cranston is easily one of the largest cities on our list, and the second largest in our top 10. That being said, it may not come as a surprise that Cranston ranked as one of the best for its number of amenities, from adorable tea spots like the Elephant Room to restaurants like the Big Cheese & Pub and Napolitano’s Brooklyn Pizza. Overall, Cranston residents have a pretty good quality of life. There’s a low average commute time of 23 minutes and some of the best weather in the state, placing Cranston at 14th for this criterion.

This village over nearly 29,000 residents may seem more like its own city or town than just a small part of the Town of Portsmouth. Home prices in Melville are low, at a median price of just $92,800. Conversely, rent prices are the highest in the state at a median price of $1,969 per month, making it clear: Melville is a village where most people rent… or just live in their yachts. Maybe it’s all this yacht activity, and everyone is just hanging out in their boats, but the crime rate in Melville was one of the lowest on our list, with just 1,585 crimes per 100,000 people. To top it off, the commute time was the shortest at an average of just 15 minutes.

The first of our tied No. 8 places went to East Providence. This city of just over 47,000 residents describes itself as a place with a “proud past and a strong present.” Of course, our numbers don’t really say much about the city’s past, but we can certainly see that at present, this place is excellent, particularly when it comes to amenities. East Providence seems to have a little something for everyone—there are specialty Asian markets, specialty Italian shops like Italian Corner; there are Middle Eastern restaurants, bakeries, and some of the best clam cakes you’ll eat in your life at Horton’s Seafood. Of course, East Providence has more to offer than just food. It also ranked well in our analysis for its short average commute time of 23 minutes, low cost of living (the fifth least expensive on our list, although still 13 points above the national average), and some of the nicest weather in the state.

Tied with East Providence for No. 8 was Newport East. This Census Designated Place in the town of Middletown didn’t exactly blow us away for its number of amenities, but it more than made up for this with its high overall quality of life score. This was due to a median household income of over $62,000 and some of the highest median home prices in the state, at $356,700. Plus, with a 20-minute average commute time, Newport East residents can spend more time enjoying the 68-degree summers and less time in their cars. Sure, Newport East may not have ranked so high for its number of amenities, but with the lobster rolls at Anthony’s Seafood Restaurant, do you really need any other amenities?

With a population of over 178,000, the capital city of Rhode Island is easily the largest on our list—which, as our analysis showed, means there’s plenty to do here. It’s the home of Brown University, the Rhode Island School of Design’s Museum of Art, the Providence Performing Arts Center, the Roger Williams Park Zoo… and we haven’t even gotten started on the food here. Needless to say, Providence ranked as the No. 1 place in terms of amenities. What may surprise you though, is that even with everything going on here, Providence is still relatively affordable, compared to most of Rhode Island’s other places, with a cost of living of just 114. Sure, this is 14 percent above the national average, but compared to places like Narragansett Pier and Newport, with costs of living of 132 and 129, respectively, Providence looks like a steal. With a commute time of just 23 minutes, and some of the nicest weather in the state, it also ranked among the best in these criteria.